It all over the news.

The supply chain is broken, inflation is rampant, and food and fuel prices are soaring. The talking heads are quick to assign blame during the obligatory interview with their favorite like-minded politician. The politician, relishing the spotlight, spouts clichés, demonizes the other party, and seeks to maximize political gain from the crisis under cover of a complicit media. Never ever let a good crisis go to waste…

Surely, in the non-political, non-media world, parcel carriers serving hundreds of thousands of “strategic partners” would not seek to take advantage of the current crisis or situation. After all, in every sales presentation, they emphasize why they bring more value and are the best choice for a long-term “strategic partnership”. What could possibly go wrong when you really have no choice but to continue to do business with one of two viable benevolent national carriers? Kind of like the multitude of viable benevolent political parties to choose from…

Despite my snarky musings, the carriers do perform a vital function, and have built incredibly sophisticated networks to keep the flow of goods moving. Like everyone else, they have had to deal with rising costs and very real impediments to doing business. Over the years, while building those complex networks (which are technological marvels), they have also created some incredibly complex contracts. (A marvel, not so much).

The tables below show a range of fuel prices with what FedEx would currently add to the total shipping cost* as the fuel surcharge. The indexes are broken out for the diesel fuel index utilized on domestic ground shipments, and jet fuel index utilized for domestic express shipments. UPS has very similar indexes with slightly different ranges and corresponding percentages. 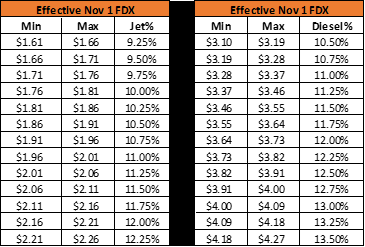 The tricky part of this surcharge is the carriers can decide to change the index at will. In essence, they can create a contract circumventing increase any time they want. Recently, these changes to the index have occurred under the shade of high publicity “situations”. Since the onslaught of COVID, the carriers have “updated” the index in June 2021, and again in November.

Chart 1 below shows the change to the surcharge percent of the fuel surcharge at $1.83 for the weekly indexed fuel cost, and the corresponding percent change. $1.83 is the 2021 YTD average of jet fuel though early December. I am dubbing these hidden hard to catch changes, “The 3-Card Monte Fuel Index Shuffle.” 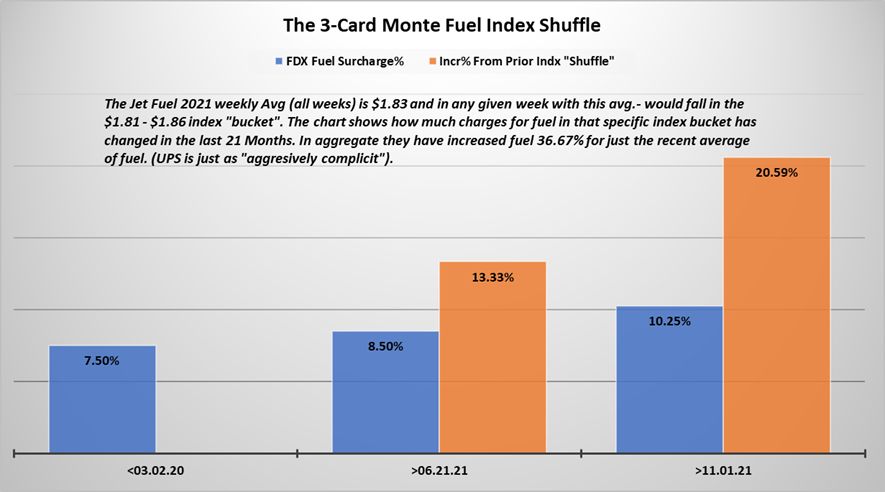 At first glance, this intuitively makes sense. Fuel is rising along with other costs. Of course the carriers need to change the index and raise rates. However, you need to ignore that the index is already there ostensibly to “protect” the carriers against rising fuel costs. You would also have to ignore the “temporary peak surcharges” that are in place to theoretically offset increased costs.

I shared this information with a client without the “filter” I am applying in this more public article. We had spent several months prior to March of 2020 negotiating a contract discount on the fuel surcharge. This client is primarily an express shipper, with a very consistent shipping profile from week to week. They asked if I could show them the impact of these index changes to their fuel spend YTD compared to the cost of fuel. Despite my cynical nature, even I was quite shocked at the result.

Result Highlights in Chart 2 Below:

o The avg. fuel percentage applied to shipments was 4.26%

o The avg. fuel percentage applied to shipments was up 138.70%

o The avg. fuel percentage applied to shipments was up 160.33% 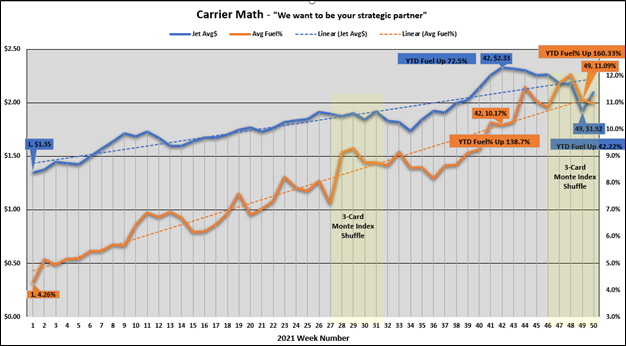 At a minimum, if your carrier rep tells you the fuel index is changing, expect your overall costs to go up. (By the way, did your rep inform you or quantify the impact?) From my perspective, the end game of the carriers appears to be a long-term play to reset the revenue and margin they collect. They are obviously benefiting now and will also continue to do if the cost of fuel reverts to a lower long-term mean. Historically, it does.

It is sheer speculation on my part to overtly imply the carriers may be taking advantage of the media cover. However, where there is smoke, there is fire.

*Not all accessorials are subject to a fuel surcharge. The overwhelming bulk of the most frequently charged items are.

Karl Wheeler is a Sr. Pricing Consultant with Shipware. Prior to Shipware, Karl was responsible for designing and implementing the entire logistics strategy at autoanything.com, including direct negotiations with carriers. Karl possesses a rare combination of analytical horse-power and strong negotiating skills that has saved Shipware clients millions in transportation spend.

What Your World Needs Now Is MORE! Next

UPS vs. FedEx Differences in Published vs Actual Time-in-Transit
Articles