Going Green: The Decision Starts with You

As a logistics consultant, I see a lot of carrier contracts in my line of work. I break them down, put them into charts and graphs, and crunch every last number. I present the best offer to my client, based on price and service, in order for them to decide which carrier to use. But sometimes, and more frequently these days, price and service is just not enough. What else is there, you ask? Well, over the past two to three years, a third variable and two buzz words have come into play. The variable is the environment. The buzz words are •going green.'

It's true. As early as three years ago, I was working with a client based in Los Angeles. After weeks of negotiations and analyzing numerous proposals from multiple carriers we were looking at a virtual dead heat. The final two carriers were a wash when it came down to dollars. In this type of situation, typically the client will choose to sign with the incumbent carrier and continue business as usual. However, this client was different. He elected to base his final decision solely on which carrier he felt was doing more to reduce their environmental footprint. He knew his company was doing its part, so he wanted to ensure that any service provider he worked with would be making the same strides. "Which one is greener?•bCrLf he asked me. "Find out, and that's who I'll use.•bCrLf

The concept for a company to become green can seem like a very daunting task. Committees need to be formed, guidelines have to be established, and results have to be measured. Well maybe it is a daunting task after all. Since it takes so much effort and activity to reach a certain level of greenness, companies are taking a different approach. They are requiring, even demanding in some cases, that their suppliers are the ones that are green. And if they aren't, then they may go with someone else.

This line of thinking is no different in the transportation and logistics sector. It seems that every other press release on UPS's and FedEx's website is about a new hybrid vehicle or how well they recycle. They are selling themselves to you through this new and ever important avenue. And they should be. Both UPS and FedEx have been going green long before it became a global trend. It may have started as a means to become more efficient or perhaps simply to cut cost. Maybe they were truly trying to reduce global warming by decreasing their environmental footprints. The reason is not important, what is important is that they are doing something and continuing to improve upon it. Now they are both considered global leaders in this movement.

Both carriers are doing their part to reduce their CO2 emissions by using alternative fuel vehicles. Each are using or testing numerous types including hybrid electric, hydraulic hybrid, fuel cell, liquefied natural gas, and compressed natural gas. The volume of these vehicles increases each year, yet due to the vastness of their fleets still remains a very low percentage of total vehicles. In addition to the ground fleet, both UPS and FedEx are improving upon their air fleets. And let's face it; there is no bigger polluter out there than an airline. They are making small steps in improving this however by purchasing aircraft with low emission engines. More specifically, FedEx is replacing ninety narrow-body 727s with 757s. These aircraft have 20% more capacity, while reducing fuel consumption by 36%. They are also purchasing eleven 777s that offer greater payload capacity while reducing fuel consumption by 18%. The carriers have also identified other ways to reduce fuel usage not related to the vehicles. Through route optimization programs such as Package Flow Technology and Pre-load Assist Labels for UPS, and The Global Operations Control Center for FedEx, they are able to minimize fuel consumption by focusing on dispatch planning, sorting and loading, and driver delivery.

They both recycle and reuse. The Next Day Air and Priority Overnight Envelopes are both made of recycled content and engineered for reuse. UPS recently unveiled an HP paperless printing solution which uses a revolutionary quick drying ink that allows users to scan barcodes and print sorting information directly on packages. This technology will save tons of paper, money, and labor hours. FedEx will be partnering with French mail carrier, La Poste, for a Cargo Rail Express project. The use of high speed trains will not only cut down transit times throughout Europe, but will reduce CO2 emissions considerably. Furthermore, FedEx and UPS have each built extensive facilities that use solar power as the primary source of power in Oakland and Palm Springs, respectively.

Both carriers are members of environmental groups. FedEx and UPS are both members of many of the Environmental Protection Agency's programs including SmartWay Transport Partnership, Green Power Partnership, Waste Wise, and Energy Star. Both have also received many awards and accolades. This can be looked at in two different lights. Their involvement may not be 100% altruistic as sitting on decision making boards gives them the opportunity to write and persuade policies. But it does show that they are willing to make changes for the sake of the environment, no matter what the reasons.

So whether or not your company is making the transition to becoming green, choosing a green carrier is perhaps the first step in greening your own supply chain. The point of this article is not to tell you which carrier is greener; rather it is designed to spur your curiosity in order for you to make that decision on your own. Once you get a better idea of which carrier is doing what, you will be able to make informed decision on what is most important to your company and your community. You might choose to reward your business to the carrier that has installed a fully solar powered hub in your region. Or maybe you'd like to give your packages to the carrier that deploys more fuel cell vehicles by the year 2010. Remember, even if you're not getting any greener within your own walls, by researching and choosing green partners, the decision to go green starts with you.

When Is It Time to Renegotiate with Your Carrier?
More From Dan Malech
Featured Articles
For the First Time FedEx Sets The Ground Rates - Will UPS Follow?
Featured News 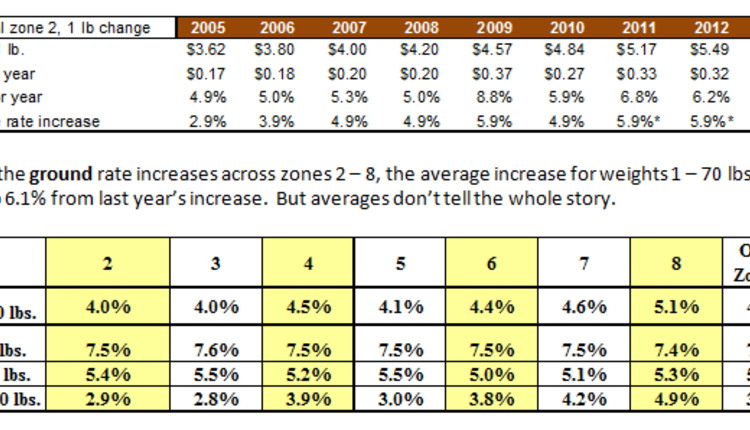