By Dan Malech
UPS has announced their service rate increases effective Monday, December 30TH, 2013. Note that the FedEx annual increase will take place one week later, on January 6th, 2014. UPS has announced that their ground rates will take a general rate increase of 4.9%. The UPS announcement comes hot on the heels of the Postal Service announcement that Priority Mail will have no overall increase in rates for 2014.

This is the first time since 2010 that UPS is not offsetting the rate increase with a reduction to the fuel index.
However, the average increase for base rates does not tell the whole story. For example, the ground zone 2, 1 lb. minimum has increased 6.8% (greater than last year, and the highest since 2011) and many lightweight ground cells are taking increases approaching 8%. Additionally, the seldom used 71-150 lb. cells are only increasing 3.6%, which is driving the overall average increase down. The Ground Residential Surcharge is increasing 3.5%, down from 9.8% last year; however, the increase to the service rates will still make this a very substantial increase. The Ground Delivery Area Surcharges are up 3.0%-3.5%.

UPS has also announced that their rate increase for air and international services is also 4.9%, with no offset to the fuel surcharge index. The base rates may average the announced increases; however, the following synopsis will highlight some particularly hard hit areas. Higher zone express shippers could experience increases in the 6%-7% range. Surcharges for residential air deliveries are up 3.1%, down from 6.7% last year, while the delivery area surcharge is up 4.7% for commercial and 4.6% for residential, and in extended areas 4.3%. The following analysis compares the UPS Daily rates from 2013 vs. 2014, not the UPS Standard rates that UPS uses for conversion accounts that match the FedEx Express rates. If you are on UPS Standard rates, please refer to our FedEx Express write up for more information. It is especially important to know what base rates you are on, as UPS will offer different accessorial rates depending on weather you are on Daily rates or Standard Rates.

It is important to realize that these announced rate increases are only averages and the impact to your company could vary greatly. To determine the real impact of this rate increase to your specific business and shipments contact AFMS for a detailed rate impact analysis at 800-246-3521 or visit us at www.afms.com.

Taking a closer look at the increase in the 48 contiguous states, the 1 – 5 lbs. package rates increased an average of 7.5%, lower than the 8.3% in 2012, but still a large increase. As in recent years, the largest ground increases can be found in the lower weight, short zone cells. UPS is able to get the average down due to the fact that the 71-150 lb cells are only taking a 3.6% increase.

As shippers seek to save money they are downgrading their lighter weight packages to ground to avoid the cost of fuel. As a result, the average ground weight is decreasing and the carriers must increase these areas to offset their losses. Conversely, the seldom used 71-150 weights are seeing an average increase of only 3.6%. You can see in the chart below how the increases get lower as the packages get heavier. Now think about your distribution and see if the average comes out to the announced 4.9%. See the attached addendum for the detailed cell by cell increases. 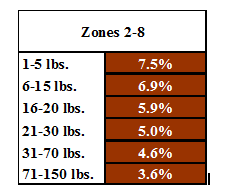 Ground to Alaska, Puerto Rico, and Hawaii came in above the announced average rate increase at 5.6% and the 1-5 lb. cells averaged an increase of 7.6%.

UPS has announced that Air and International rates will increase by 4.9%, slightly higher from last year’s increase of 4.5%.

• Early A.M. Surcharge: Will increase $1.00 if you are on Standard Rates 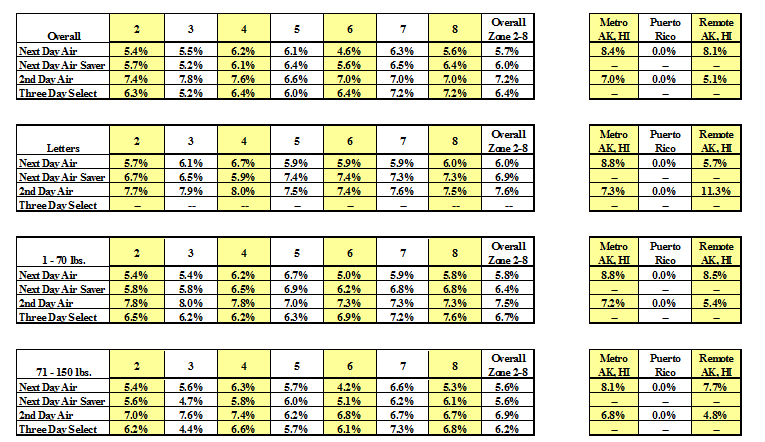 UPS Next Day CWT received an average increase of 5.1% in the contiguous US, down from 7.0% last year. 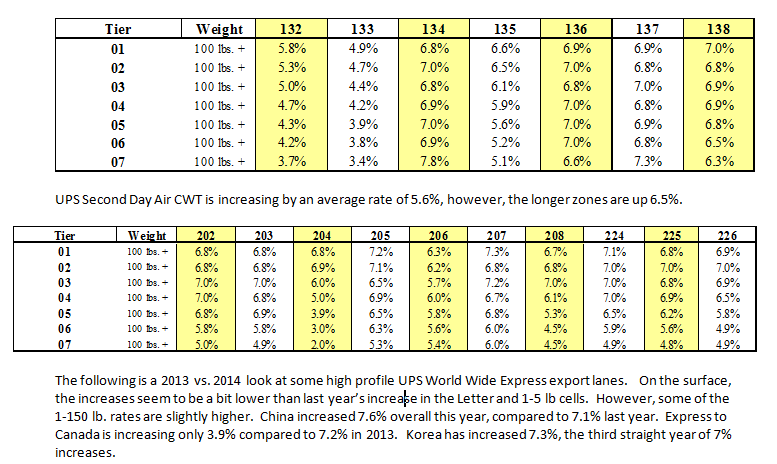 FedEx 2014 Air List Rates vs. UPS 2014 Air List Rates
Historically, published FedEx Air rates are more expensive than published UPS Air rates. However, that gap has been closing every year and now we are actually seeing some rates in the Three Day service where UPS is more expensive than FedEx. It is important to monitor this difference each year as a discount rate from one carrier does not translate into the same net rate for the other. Also, keep in mind that UPS has created a base rate chart called UPS Standard Rates. These rates match the FedEx Express rates and UPS may potentially change these base rates at their discretion. The following tables show the difference when comparing the FedEx 2014 list rates to the UPS 2014 daily list rates for both letters and packages. For example, a FedEx 10 lb. zone 8 Priority Overnight Air package has a list rate of $104.85, while a UPS Next Day Air 10 lb. zone 8 package has a list rate of $104.05. Last year, the FedEx package was 3.1% more expensive than the UPS package, in 2014 it is less than 1%. This is still important during negotiations because if UPS offered a 50% discount, FedEx would have to offer a 50.4% discount just to match. For this same example last year, FedEx would have had to offer a 51.5% discount, but UPS’s rates increased at a higher rate than FedEx’s. Even with the creation of UPS Standard rates, the daily rates are slowly approaching the FedEx List rates. 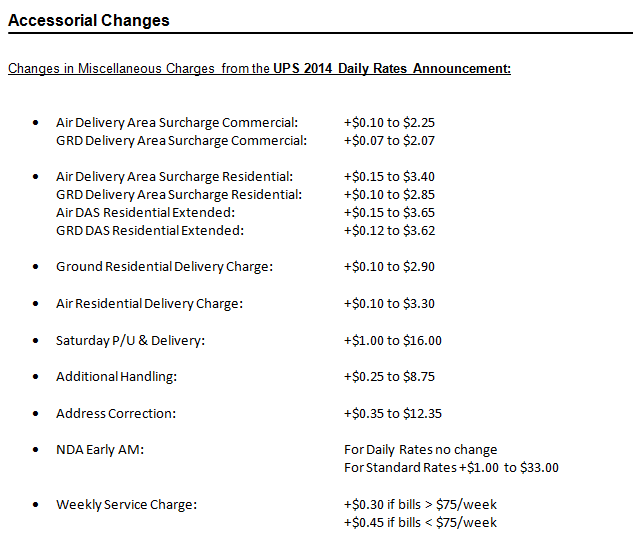 Why the U.S. Postal Service Can Win the Battle for the Same-Day Delivery MarketNext
PARCEL FORUM Previous
More from Featured News