Late on a Friday afternoon in early May, FedEx dropped a bombshell — effective January 1, 2015, all Ground shipments, regardless of size, will be subject to DIM (short for dimensional) charges. For many shippers, this will amount to a double-digit rate increase, and that will be on top of the yet-to-be-announced 2015 rate increases (last year's increase was 4.9%). Currently, only an estimated 15% of FedEx ground shipments — those 3 cubic feet or greater — are subject to these charges. FedEx now delivers about 4.6 million ground packages per day, so that’s 3.9 million new daily packages that will now be subject to the charges. Although we have not heard yet from the other carriers, it’s a pretty safe bet that most will follow suit. So regardless of the carriers that you currently use, there is a very good chance that at least some of your shipments will be affected by these new charges.

First, let’s look at the events that precipitated this change, and then we’ll explore some options on how to reduce – or even eliminate – the impact of these charges.
Why the change now? For years, the carriers have experienced explosive growth in B2C shipments, and those shipments are starting to take a toll on these carriers’ pickup and delivery networks. UPS and FedEx now capture the dimensions of each shipment while in transit, and they have taken note that many of these new shipments are in relatively large, but lightweight boxes. For both carriers, virtually all of their transportation modes — including trailers spotted at shippers' locations, cargo planes, tractor trailer rigs and rail vans – will often physically fill up with packages long before they hit their maximum operating weight. We are even hearing reports that some carriers’ delivery vehicles are starting to “cube out” on busy days. Normally, a delivery van is loaded with the packages for the entire route in the morning, and returns to the station at the end of the day. However, if the delivery vehicle “cubes out,” the driver will be forced to return to the station in the middle of the route to reload, and costs will skyrocket. The only other alternative is for the carriers to replace their delivery fleets with larger vehicles — an extremely costly proposition. FedEx is hoping to change shippers’ behavior with these new rules, before that becomes a common occurrence.
Here are the current dimensional factors for FedEx, UPS and the Postal Service — the higher the DIM number, the higher the potential for additional charges: 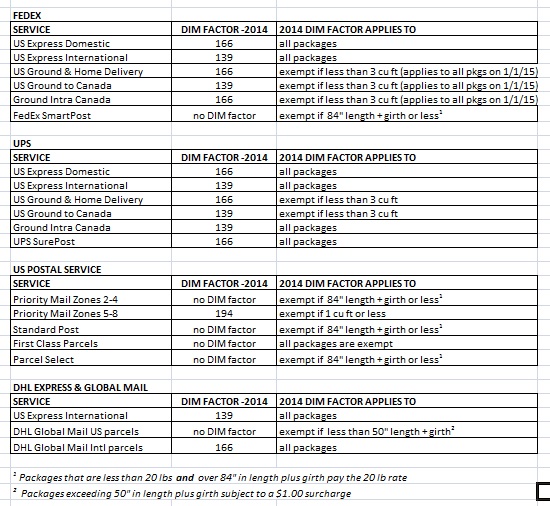 International Mailing of Dangerous Goods: What Is Mailable Next
Reducing Returns: An Ounce of Prevention Is Worth a Pound of Cure Previous
More from Featured Articles