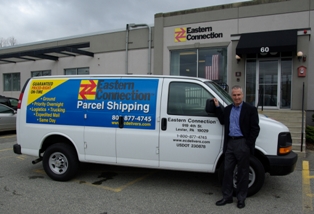 Cumberland, RI—Eastern Connection— one of the largest regional parcel carrier serving the East Coast and beyond—is celebrating its founding on Valentine's Day 31 years ago in 1983 with the launch of new, "green" initiatives to help reduce the company's carbon footprint. In addition, the company has set aggressive goals for growing its business in 2014.

Photo caption: Driven to Deliver for 31 Years. President and CEO, Jim Berluti, is optimistic about the growth of the regional shipping industry and has embraced green initiatives to help fulfill Eastern Connection's 2014 goals. Berluti co-founded Eastern Connection with Ted Kauffman.

According to Jim Berluti, President and CEO, Eastern Connection hopes that that through the implementation of its advanced MC70 wireless scanners, paper delivery and paper PODs will soon be obsolete.

"We believe that it pays to go green in more ways than one," says Berluti. "We hope to continue to look for new ways to •green' our operation as a way to protect the environment."

When Eastern Connection opened its doors in 1983, the company delivered 18 packages. It now delivers more than 20,000 packages daily to and customers in over 6,800 zip codes.

According to Ted Kauffman, Chairman of Eastern Connection, it's clear that regional carriers are taking market share away from the national giants, a trend that has accelerated since the well-publicized end-of-year holiday delivery snags of UPS and FedEx. Our message is that there is a viable third shipping alternative through regional carriers.

"Part of our focus," Kauffman adds, "is educating the marketplace that regional carriers offer distinct advantages in terms of reliability, cost savings, flexibility, and personalization."

In addition to the company's new initiatives, Eastern Connection has partnered with longtime customer Legal Sea Foods for an anniversary promotion in which 31 customers won a contest to receive a free lobster dinner-for-two delivered to their door by Eastern Connection.

Founded in 1983, Eastern Connection, the largest regional small-package overnight carrier on the East Coast, covers over 6,800 zip codes in the Northeast. The company, which has 16 facilities, is open 7 days a week and 365 days a year. Services include Next-Day Ground, Priority Overnight, Same-Day, Second-Day, Logistics & Warehousing, Trucking, Medical Logistics, and Expedited Mail. For more information, visit www.easternconnection.com.

BÖWE SYSTEC: Branching out into postal and parcel logistics
DHL Express Certified in the U.S. as a Top Employer for 2017
DHL Expands Global Partnership with WE by Honoring Young American Leaders
{top_comments_ads_mobile}
comments powered by Disqus
{bottom_comments_ads_mobile}